Here we are again, at the day on which we learn about our near future, meteorologically speaking of course. On this 33rd day of the year Punxsutawney Phil evaluates his environment and, to a degree, plans our lives for the next few months.

For about 120 years or so, Mr. Phil has favored us with the wisdom of his experience - for better or for worse. He hides out in Punxsutawney, Pennsylvania (NE of Pittsburgh, NW of Altoona, NNW of Johnstown, pop. c. 6,000) and predicts six more weeks of winter if he sees his shadow, or an early spring if he does not see his shadow. Out of 114 prognostications, he has said/shown/indicated more winter seven out of eight times [including 2010}. His scorecard? According to the PGCIC (Punxsutawney Groundhog Club Inner Circle) he has been correct 100% of the time! According to the Weather Almanac, he comes in at about 39% for being on the mark. I'm not sure how his wife, Phyllis, feels about his low rating - maybe he wants to run for President - of something - or of someplace.

His cousins abound throughout the continent - for example there's "Buckeye Chuck" from Marion, OH (50 mi. N of Columbus, pop. c. 35,000) who predicts an early Spring, and "Balzak Billy", living in Balzak, Alberta (just N of Calgary, W of Rtes. 2 and 566) -hasn't reported in, not to mention "General Beauregard Lee" of Lilburn, GA (on the NE edge of metro Atlanta, pop. c. 12,000) who predicts an early Spring.

Quarryville, PA (SE of Lancaster, W of Philly, pop. c. 2,000) has its own "Octorara Orphie" as a personal identifier of seasonal drifts - sorry, no report, and what of "Brandon Bob" , Brandon, Manitoba (130 mi. W of Winnipeg, pop.c. 39,000), a helper in the Prarie Provinces (alas, no report), then "Shubenacadie Sam" (Shubenacadie, Nova Scotia, NE of Halifax, SW of Truro) tells us its going to be an early Spring.

The festivities last Saturday featuring "Two River Tunnel" (Marion Bridge, Nova Scotia - S of Sydney, Cape Breton) were canceled due to inclement weather; they forward the idea that Tunnel probably would not have seen his shadow, hence we will have an early Spring.

Down the Atlantic coast, we could meet "Malverne Mel" in western Long Island (Malverne - N of E. Rockaway, NE of Valley Stream, pop. c. 9,000) who predicts that (at least) six more weeks of winter are left; gliding over, we might see "Staten Island Chuck", whose real name is Charles G. Hogg. They credit him with being 80% correct since he started in the 1980's. He's been doing well - except for biting the finger of Mayor Michael Bloomberg last year. He (the Mayor) was back at the S. I. Zoo for the challenge again this year and held the prognosticator (with heavy leather gloves) as we were told to look for an early Spring.

"Woody", [no middle initial] (in Howell, between Lansing and Detroit, MI) also predicts an early Spring. Hopping over the northern border in a figurative manner, we'll stop first at Kleinburg, Ontario (uninc. community of Vaughan, N of Toronto, off Rte. 400, near the Boyd Conservation Area and home of former Prime Minister Lester Pearson, pop. c. 1,000) to meet "Gary the Groundhog". Gary couldn't share with us today as he was having breakfast with the great-grandson of the P.M.

Well, moving on NW of Toronto, we come to the Georgian Bay region - and Party Headquarters for Prognosticators- and home to "Wiarton Willie" (Wiarton, Ontario, SW area of Georgian Bay, pop. c. 2,300), where the time is considered a Festival - dances, parades, hockey tournaments, curling, pancake breakfasts, sleigh rides, etc. The emphasis began in the mid-1950's and brought along Willie in the '80's. His descendants are noted as Wee Willie, Wee Willie II, and on. Early names for representatives were - Grundoon, Muldoon and Sand Dune, revealing a certain approach to the activities. The people feel they (and Willie) are best situated for rendering a judgment on the future as they are on the 45th parallel, equidestant between the North Pole and the Equator. It must count for something. Locally, Willie's 90% correct; scientifically - they say 37%. Who ya gonna buhleve?

I'm sure you've heard of "Arizona Abner" - unfortunate - he was buried alive under a K-Mart parking lot. Now that means seven years of summers are expected for the whole state of AZ!

*****
Dribs and Drabs - Today is also considered Candlemas Day, the fortieth day of Mary's purification following the birth of Christ. In some quarters there is much ado regarding this celebration. Some lines from Candlemas deal with the proposed seasonal variations:

"If Candlemas be fair and bright,
Winter has another flight;
If Candlemas brings clouds and rain,
Winter will not come again."

Every month or so . . . comes the nagging thought that, yes, I should work toward some consistency in the presentation of blogs - so here's the start.
The time-frames in the title fall out like this - Yesterday - the six-month dental checkup brought the news that all was O.K. with the exception of the two crowns needed. Hmmmm. . . Let's try Today - Cardio at the new 10:00 time works out well; finally mailed a friend's books in his direction; on the search for wood putty (and found it); State of the Union presentation tonight; still very hard to connect with this man. Here we are at Tomorrow - lunch with other retired teachers at the Outside Inn, shop for $1 boxes of Blueberries, pick up meds -expectedly.
The writer of the book of Hebrews uses a similar time-frame, but adds a lot of tomorrows as he/she comments "Jesus Christ is the same yesterday and today and forever."(NIV) as the changelessness of Christ is reviewed once more. It's unlikely the activities of the writer would have borne much similarity to my outline, but we both deal with Yesterdays, Todays and Tomorrows. For that I'm grateful.
Posted by George at 9:25 PM 1 comment:

It's December, it's Winter, it's New Year's Eve, and it's the last chance to be a good guy this year.

Must string some letters together . . . .

How about: Had a great week in the capital city of the center of the universe! Friends and family from near and far - mix that with delicious food and a dessert or two - throw in a BBQ from time to time - walk ZooLights - add some kettlecorn - do some scrapbooking - dig for your ancestors (figuratively) - have just one more jelly wreath cookie - attend a Christmas eve service led by a pastor was fortunate to be in attendance, broken elbow and all - share Christmas morning with the good guys - (where are those snickerdoodles?) - golf (for some) - Sunday morning service with the dedication of the newly-adopted twins - read - shop - scrapbook - call family or be called by family - plan for the next gathering.

Well, that wasn't too bad! Wrap that all up in safe travel, and it seems like a time for Thanksgiving all over again!

Have a great and blessed New Year all year long!
Posted by George at 6:56 PM 1 comment:

I have a friend who is dealing with esophageal cancer and had been keeping track of him through other friends. I finally decided some face-time was appropriate. Wanting to 'take something' with me I contacted another friend who had recently authored a book on the OSS, (pre-CIA) and 'Undercover Leathernecks'. He's had several magazine articles on Civil War settings and now focuses on WW II.

We chatted about archival resources around the country, mutual friends, travel, current aches and pains etc. The conversation prompted me to move on a WW II project which has been on the shelf for a (long) while. (This will be developed in another session.)

The book is signed, I'm knocking on the recipient's door - and his mother informs me that his wife took him to help a lady with her computer! Sounds like a good report to me! He is doing well but there is still more of the road to travel.

All in all, a good day for at least three people.

If there has been a rumor abroad that I'm preparing an apology for all this language jazz - it's not true.

Who delivers the Easter treats to all the fish?

Today's paper had a story about a local whose granddaughter is age nine today on this 9 9 09. Devon's greatgrandmother is 93 on this day (we'll call that a partial); she is the ninth grandchild of our patriarch and her mother is his ninth child. Devon's address is 999 on her street. Our patriarch is 81, which when added together total - __ right!

Last year the National Weather Service changed the approach to the designation of the
monsoon period. For years a dew point temperature of 55F or higher for three consecutive days would announce the start - often early- to mid-July and the period would end, usually mid-September, with a string of three days with a dew point of <55F.

Now they appproach it less as a baseball statistician would, and have the man-on-the- street welcoming style. The monsoon period is now designated as June 15 to September 30.
Take care- don't let the meteorologist-eavesdropper hear you say monsoons - as in "the
monsoons are late this year". Smiles will come if you call it monsoon, but not if you call it "the monsoon season". Huh? Monsoon is an Arabic word meaning "season". You should be able to note the social awkwardness quickly and shy away from it. The 'season' must include a change in the wind direction - ours goes from being mostly westerlies to a south/southeast direction. The heat of the summer (110'sF) pulls the moisture up from the baja and the Gulf to rain on our parades now and then.

The most during this period has been 9.36" and the least was .35 - this is why we measure in hundredths of an inch - quarter-inch groupings would never do.

***** ****
Painting indoors? Wear an old pair of socks over your shoes; it saves the shoes from drips and
easily rubs up splatters on the floor.
Posted by George at 8:40 PM 4 comments:

Raine, raine, do your thing, See what blessings you may bringe

Right on schedule (every four or five months) - somebody hits the switch (maybe it's the lightning), and the presses start rolling again. Actually the pressure is not so much on the switch as it is on the individual - I just wanted to stop the yelling! So, for a period of time, and some degree of regularity it may come to pass that words will flow which will contain an acceptable level of understandibility. And maybe interest.

After a delicious meal at home or abroad, I'll often say "Pretty good, what there was of it" knowing full well that seconds are readily available. So far, faint smiles outnumber the slaps. . .

These words could be applied to our rainfall (y.t.d.) in this southeastern corner of a Southwestern state. Numerically speaking, our annual rainfall just bumps over 14". The y.t.d. average is just under 11" and this year we're sporting 4.39". That leaves us with- just a minute- (tap tap, tap, tap tap tap tap, tap)- here we are6.5" short so far this year, with our wettest month, August, well behind us. What to do? More on Mr. monsoon next time.

This nursery rhyme is often used by those well beyond elementary-grade years -
Rain, rain, go away,
Come again another day (and often with. . .
Little Johnny (Brenda, Arthur, Elspeth, etc.) wants to play.

[People from the Eastern U.S. and Cananada, with their uncertain, untimely and undisciplined 'rain showers' repeat this oftenly in the summer season.]

The rhyme goes back at least to the late 17th Century - John Aubrey, the holey one, is almost certainly a brother of some sort and note children using 'Raine, raine, go away, Come again a Saturday', to "charme away the Raine". 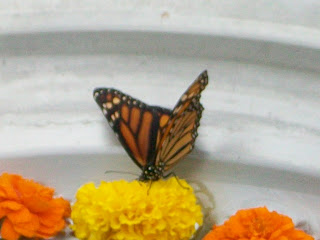 Now is the time for every good man to come to.
Posted by George at 9:13 PM No comments: